In memory of two great men

October 24, 2020
Long before I met him, my husband was in high school with two of my cousins. One of them actually shares his birthday so it's become a bit of a joke that I never forget her birthday anymore.  Earlier this year I knew I'd have her memory quilt from our grandpa's shirts finished in time for their 50th birthday and I knew if she was getting a quilt and he didn't I'd never hear the end of it (granted she's never gotten a quilt before and he'd already gotten 3). I have wanted to make him a memory quilt of his Dad's shirts as well so I made their birthday my deadline.  Most year's sewing a semi-secret project for him wouldn't be a challenge at all due to my summer vacation.  However with Covid, he's always home!  I hid in my sewing room to prepare the pieces and sewed non-stop when he took him mom for a procedure but I still had to bind it and couldn't finish that step until days before their birthday when he went camping with the "manly men."  Just a little while ago I realized that Pop became a grandfather on the same day that my father-in-law became a father, so it's appropriate to share both quilts together, right?
Pop was a tinkerer, and outdoors man so the old forest fire service truck at a local state park was ideal for those pictures. 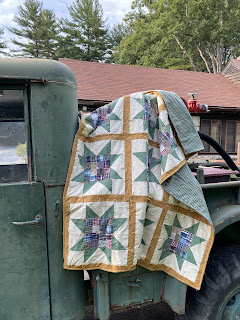 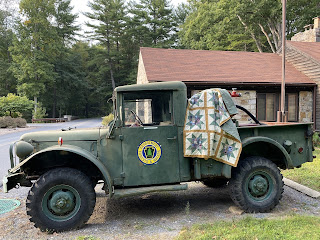 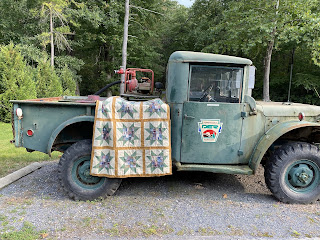 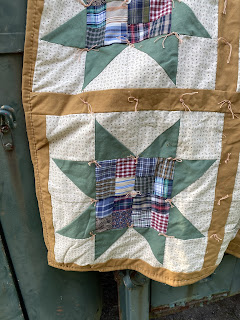 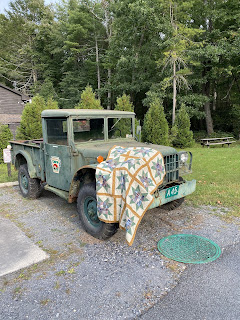 I asked my husband to pick where we took his Dad's shirt quilt for pictures and after many ideas he decided to do them at the Budweiser brewery in Williamsburg on our trip last weekend.  He remembers his Dad stopping the car near the brewery when he was young and pointing it out the the family-he says it smells better today than he remembered from the 80s. 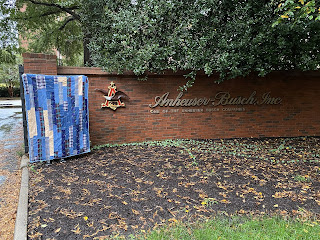 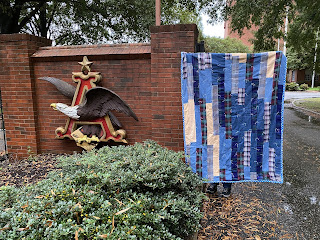 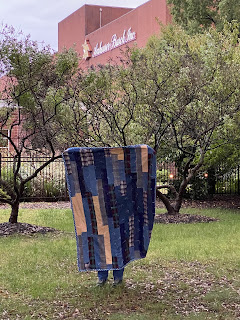 Shawn talks fondly of Saturday morning cartoons with his dad, so when one of the shirts had a Looney Tunes back I knew I had to feature it somehow. I thought I’d make it the center of the quilt but when I sat down to start it I wasn’t thrilled with that, so I made it the center of the back. 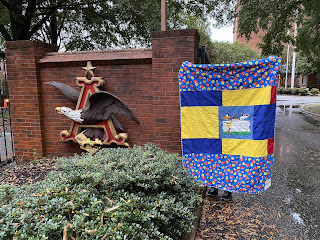 Both my grandfather and my father-in-law were wonderful men and missed very much.

Time in a Bottle 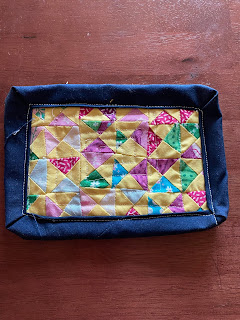 I've only recently started to enjoy making half square triangles, so when the theme for Time in a Bottle was announced I wasn't sure I'd participate.  I considered making a mug rug for game night with a hourglass applique but since the prompt specifically said the hourglass block I wasn't sure that would work.  Then when I started working on the Oh My Stars quilt I showed last month in the Tickled Pink blog hop, I realized I had a lot of bonus triangles I could use.  I have a tendency to throw those bonus triangles in my scrap bin and add them to crazy blocks but I decided I'd use them to make hourglasses this time.  By the time I trimmed them my hourglass was much smaller than I usually work with, but they weren't so bad to work with, until it came time for quilting.  Between a needle I should have replaced and a lot of joined seams the back has some areas that don't look so great-if it were something that would be seen I'd feel the need to tear it out
Read more 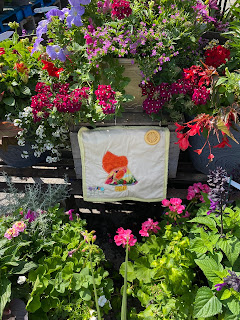 Carol of  Just let me Quilt  had organized another great blog hop.  Our prompt this time was to create something sun related.  I went through a number of ideas, but kept coming back to the same one.  At m6 quilt retreat this spring, we had a demonstration of Dorset Buttons by a couple of the embroidery ladies.  They thought maybe we quilters could use them for embellishments and gave us each a kit to make two.  When watching the demonstration I thought watching it was mesmerizing but couldn’t see myself making them.  A couple weeks later we had a teacher wellness day and one session was an hour of doing your own crafts.  I wanted something small enough to take to work so I took my kit and realized they were fun and the small ones weren’t nearly as time consuming as I expected.  I am starting to make some into jewelry and wreaths and hoping to sell at some local craft events.   Several of my early buttons My first Dorset Button When I made the pastel wreath, I thought it would take a d
Read more 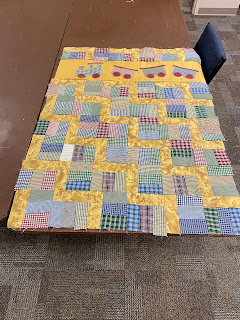 When this blog hop was announced I knew it was a perfect fit because of how much we love to travel. I had so many ideas of travel quilts; none of which have been sewn yet. After evaluating my UFOs in the last hop I decided I needed to focus on projects with definite deadlines rather than "that's cute and would be nice to make someday" projects...Fortunately I had a baby quilt with a deadline that also matched the theme! When someone is taking a train trip, there's probably someone left behind saying "see you later, alligator" after all. I also completed another baby quilt top at my retreat with Noah's Ark, though I can't find it, there has to be an alligator in there somewhere. Both of the babies are expected in December and I have the backings ready so quilting them should definitely be done in time to prevent these from becoming UFOs. Be sure to check out the other bloggers participating today: Monday, August 22nd Just Let Me Quilt Days F
Read more