June 04, 2020
Once we were finally able to camp we seem to have been making up for lost time.  We typically camp about every other weekend, but with nearly everything cancelled we didn't see a reason not to camp again the last weekend of May.  Prince Gallitzen is a huge campground (over 400 sites) but still has nicely spaced campsites.  One of the main attractions to this park is the lake which is over 1,600 acres. When we visited before they had a sunset photography class so we knew just how pretty the park is.  When I  booked the site there was only one site left that was both electric and pet friendly so having a view of the lake from our campsite was a pleasant surprise.  The bathhouse was relatively updated and very large.  My only complaint was that it was the type of shower where you hit the button for water and it lasts for a short time; I really prefer knobs so I don't have to restart it with shampoo in my hair.  Of course there weren't any park activities during this visit due to the virus response, but I've seen a number of programs on their Facebook page that look like they'd be enjoyable.  My husband says it is one of his favorite parks, but he doesn't really like the drive there because it is a lot of back roads in the mountains.  We will definitely return here though because the water is so relaxing and it is such a pretty park.

Friday evening we got set up and started a fire with the scraps of wood I brought home from shop cleanup and I went to the camp store to get firewood.  They actually deliver the wood for you, which is a nice feature, but by the time he brought the wood just a few minutes later it started to pour.  We thought about going to a local restaurant but something made us turn around-thank goodness because in setting up the awning my husband forgot to put one side lower and water was really pooling and if we hadn't been there to realize what was happening it would have caused some real damage.
Saturday morning we walked part of the trail that surrounds the campground but the previous night's rain made that pretty muddy and we got to a no dogs sign so we had to turn around anyhow.  We had some nice views of the lake and of other areas of the campground.  We then went to one of the marinas and walked along a paved path enjoying more views of the lake.  Around lunch time my parents came to visit and we went to a local ice cream place with take out sandwiches and ate at an overlook by the park office. Before we left on Sunday we were planning to walk across the dam, but there was some sort of construction so we went back to the marina and walked along the shoreline. 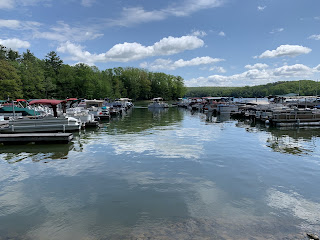 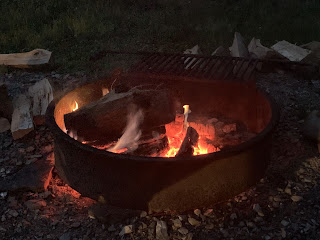 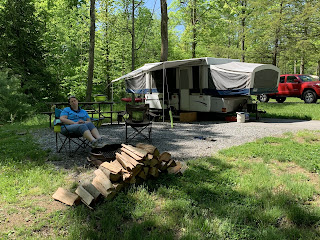 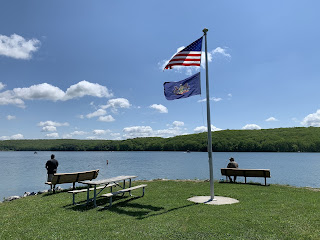 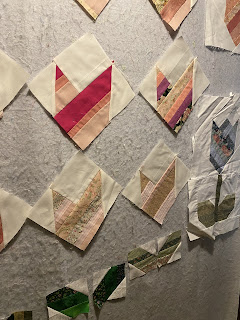 When Carla, from Creatin' in the sticks  announced the theme for this blog hop was to use pink I think something went wrong in my brain and I heard that the theme was to jump from one project with some pink to another, depending what tickled my fancy...that seems to be what I did anyhow! I was really hoping I'd use the opportunity to finish one of my pink tulip quilts.  I had been inspired by the "All about Strings" blog hop in 2019 and started a lot of tulip blocks; sadly I have yet to finish a top from them.  Maybe that can be my project for the upcoming UFO blog hop!  I did make progress on them until I reached the point where I'd need to cut some strips for the stems. That delay allowed me to become distracted by another project.      A good friend had passed along feed sacks her grandma collected after her grandma passed away last year.  I've wanted to make a Sunbonnet Sue project for a long time and had just gotten the accuquilt die for both Sunbo
Read more 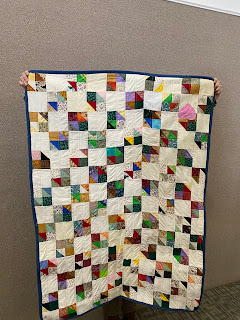 I really had no idea what I was going to make for this project when I signed up.  Then not long before Christmas I found out one of my best friends' mom was having significant health problems and I wanted to make a quilt for her...My big Christmas gift was an accuquilt cutter so I dug into my scraps and started working; in the back of my mind I thought I'll applique a polar bear on the quilt and it will work for the blog hop.  Then I realized I used white for the solid portions so that wouldn't work...I love flannel for the back of quilts so I searched and found a flannel polar bear print to use.  My friend's daughter says she likes the back even more than the front.  Once I was finished I started to think people wouldn't really see the polar bear tie in so I added this little mug rug.   I also have to include this tiny arctic wall hanging.  I bought this kit on our Alaskan honeymoon and finished it several years later. It now hangs in my craft room.   Be sure to vi
Read more 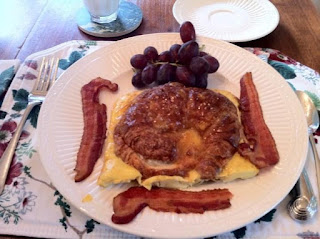 I've followed Carol' s Virtual Christmas Cookie Exchange for several years but this is the first year I've joined because I really don't do a lot of baking.  The farm market near us makes such good cookies and there's so much less mess to clean up! While I don't bake we do have a number of traditions we've made as our little family of two.  From the first year we were married one family tradition has been that I make a breakfast casserole we had on our mini-honeymoon for Christmas breakfast and I stay in the room  while my husband watched The Christmas Story (he watches it many times but I'm not really a fan so this is one of the only times I watch it with him.). I will also make this casserole for my church's fellowship time occasionally and I'm often asked for the recipe. Croissants A'La Orange 6  plain croissants (I usually buy pre-made from the grocery store and use the whole package)   1 (9 ounce)  jar orange marmalade   3 ounces orang
Read more